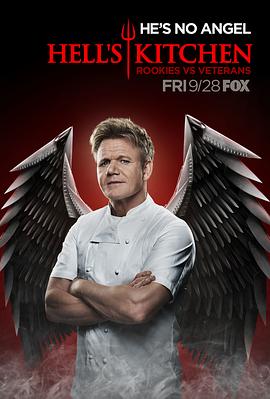 给剧集打分：
烂剧
0.2
评分加载中...
你是否也在寻找
迅雷提示“版权要求 无法下载”点我查看解决方案 >>
0
注意说明
注意说明
剧情介绍：The eighteenth season of the American competitive reality television series Hell"s Kitchen (officially known as Hell"s Kitchen: Rookies vs. Veterans) began airing on September 28, 2018 on Fox. Gordon Ramsay returns as host and head chef, and Season 10 winner Christina Wilson and British MasterChef judge James"Jocky" Petrie return as the red and blue sous chefs, respectively, alongside maitre"d Marino Monferrato. This season features eight new contestants battling eight returning veterans. For the first time, the winner of this season will receive a position as an executive chef at Gordon Ramsay Hell"s Kitchen Restaurant at Caesars Palace in Las Vegas, Nevada.
This is the first season since season 1 to not begin with men on the blue team and women on the red team. It is also the third of the last four seasons to feature a chef eliminated during service, the first season since season 13 that no chef from the winning team was eliminated, and the first season since season 12 where two chefs quit. This is also the first season to have a chef quit before the finals. Ariel Contreras-Fox, who previously finished in third place on Season 6, won the competition; she is the second consecutive returnee, and sixth consecutive woman to do so. She is also the ninth contestant to win the competition without being nominated for elimination once, after Kimberly-Ann Ryan, Meghan Gill, La Tasha McCutchen, Christina Wilson, Holli Ugalde, Dave Levey, Heather West, and Michael Wray.